Within days of receiving Rosalie’s CVI diagnosis I made a mental list of all the places she regularly spends time (the crib, high chair, car seat, bathtub, etc.) so I could think of how to make those spaces more visually accessible to her (which you can read more about here). We were very home-bound when she was little, due to many factors relating to medical complications combined with my sheer terror when I thought about the possibility of her (or her big brothers!) getting sick that fall/winter/spring. But, because Rosalie has two big brothers we necessarily spent a great deal of time engaged in free play throughout the house.

We clearly have two spaces in which the boys regularly play, depending on what time of day it is: the designated play room (located upstairs) and the living room (located downstairs near the kitchen). These were the two rooms in which I would spread out a big baby blanket and create a “play space” for Rosalie as she grew, so the obvious next step after learning about her CVI was to make both of those baby play spaces easier for her to see. I really don’t think I had even learned the visual term “defined spaces” yet, but it made perfect sense to minimize the complexity of these spots where I would regularly lay her down with some toys.

The living room was pretty easy, because I had already naturally carved out a little safe space for Rosalie where her brothers quickly learned to stop running, slow down, and be extra careful (we had made strict rules early on about not getting on her baby blanket without asking my husband or me). So, all I needed to do was trade out the blanket for one that is solid black (which I purchased on Amazon). Then, I placed a black tri-fold “science fair” board near the blanket so we could minimize complexity while she was side-lying or doing tummy time. 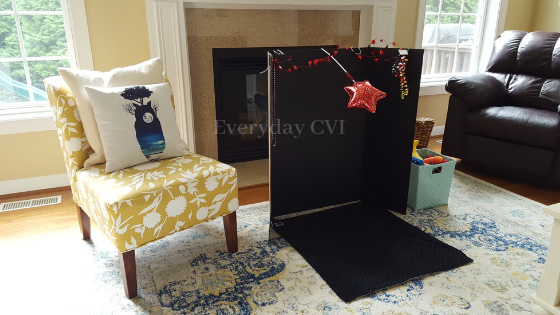 Since Rosalie was 7 months old when we received her CVI diagnosis she had long out-grown our “real” baby play mat that came with hanging toy attachments, but her CVI meant that she really needed to have things hanging above her that she could practice looking at. She was not yet mobile (she had started rolling to her sides and a little bit onto her stomach), so having things hanging above one space where she could not move from was an important way to integrate vision into her play time.

We did not yet have a “toy bar” from which we could dangle toys/items for her to look at, so in the mean time I figured out ways to attach items and “hang” them from the top of the black tri-fold board. That way I could place the board next to the black baby blanket and she could (while laying flat on her back) look up and see objects that were both eye-catching (shiny/reflective) and some of her preferred colors. Here is a better look:

How did I attach the beads, garland, and star balloon? Two things: pipe cleaners and duct tape. Pretty simple! I literally shaped some pipe cleaner into a ring and duct taped it to the back of the board. Like this:

Then I was able to hang and/or string some items through the loops, like this:

All of this was inexpensive and quick to make. It may not be a “perfect” system, but it certainly is functional, which means it ultimately served its purpose. And, Rosalie likes it!

Upstairs in the play room Rosalie did not yet have a true “defined space,” but it became important to create one after learning about her CVI. I was worried about her big brothers running around being more rowdy in this room, so I carved out a safe space in a little alcove next to our couch – which allowed her to be protected on 3 sides. I purchased a cheap black bed sheet at Wal-Mart, placed another black “science fair” tri-fold board on it, and voila! Another defined play space. 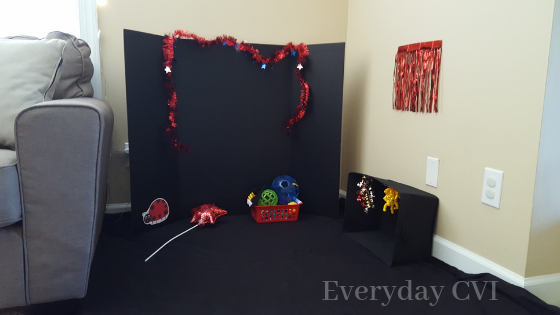 Rosalie had quickly destroyed one of the pom-poms I had picked up from the Dollar Tree, so I saved the red portion when it unraveled and taped it to the wall with some sticky mounting foam (also from the Dollar Tree). It added something red and shiny that would catch her eye whenever she would look at the wall. You can also see that I taped some red tinsel across the top of the tri-fold board for added visual attention-grabbing. 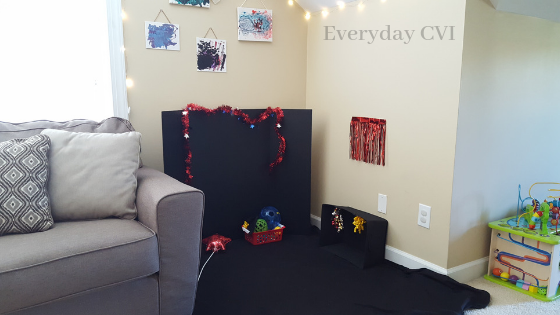 Eventually I also strung up some LED lights (found here on Amazon) that I sometimes turn on a slow blinking setting. I used the lights more in the earliest weeks of her CVI diagnosis, but do not use them as much now that she is rolling more/spending lots of time on her tummy and has made progress in seeing more toys and everyday objects. I think the lights would be especially helpful to those still solidly in Phase I CVI.

Here is what the defined space looks like from a little further away:

Something I find helpful in both defined play spaces is having two baskets nearby: one with “normal” (aka safe) baby toys, and one with items dedicated solely to vision – you know, all those pieces of cut-up mylar balloon paper, slinkys, pom poms, strings of beads, or flashlights that can be great vision tools but cannot be given to an infant without careful supervision. That way I have a basket of items I can safely hand Rosalie to play with when I need to quickly break-up a brother disagreement, discipline someone, or change the 3 year-old’s diaper. But, I also have all kinds of helpful items to get her looking and tracking when I can sit down and focus on her vision needs.

As Rosalie grows, her mobility improves, and she makes progress with her vision I plan to continue adapting these defined spaces to better meet her needs. For more thoughts about defined play spaces, check out this article on WonderBaby.org!

This post may contain affiliate links. As an Amazon Associate I earn from qualifying purchases.