As my young child with Cortical Visual Impairment (CVI) has become progressively mobile, it has become increasingly important for me to think about what I can do to help her visually orient herself within our home.

You may recall that some months ago I began using washi tape (like this glittery set) to highlight some light switches with pops of sparkly color. This provided a fun visual and fine motor activity of turning light switches on and off while I necessarily carried my daughter, Rosalie, from room to room with me. So, it was only natural for me to start looking around at other things it would make sense to highlight as Rosalie began moving around the house more independently.

Where did I begin? For starters, I gathered my supplies: scissors and tape. Really, that’s all it took!

As you will see, I ended up using various kinds of tape on different surfaces – depending on the material, color, and what the purpose of the tape was. Pictured above is a shiny red tape, similar to this one found on Amazon.

The first thing I added tape to was our kid-size play table. Last summer we began using the table as a tool to help Rosalie get some added weight-bearing during her physical therapy sessions and play. We would place a familiar toy (novelty) on the table and help her stand up while playing with it. Rosalie, who was unaccustomed to standing up and bearing weight, would frequently let go of the toy and/or table and need to grab back onto the edge in order to steady herself (this was while being spotted by her PT, of course). But she had difficulty visually finding the table’s edge.

Here is what the table looked like before highlighting it:

To help her find the table’s edge and grab on, I covered it with shiny, red duct tape.

And voila! She immediately began finding the table’s edge every single time she needed to grab on. Nowadays the tape is still there, serving as a visual aid when she grabs and works on pulling herself up to standing. The “before and after” pictures look much alike, but to someone with CVI a simple pop of color (bonus that it’s shiny, which the brain registers as movement!) can make a huge difference. (Learn more about the 10 Characteristics of CVI here).

Rosalie is currently pulling herself up to kneel on all kinds of things and is beginning to pull herself up to standing with the right circumstances and support, so I thought back to how my other kids typically began pulling themselves up: inside the crib!

We’ve had this Baby Einstein Sea Dreams Soother Musical Crib Toy for a long time and Rosalie is highly motivated by music, so once she learned how to sit herself up independently she naturally began reaching towards the crib toy. Since getting strong enough to kneel, that reaching has evolved into her kneeling to activate the crib toy. This is beginning to translate into sometimes exploring the bars of the crib while sitting and kneeling, so I wanted to make sure she can find some areas if/when she wants to start practicing pulling herself up higher.

The bright yellow on the top edge and some white around a couple bars provide a bright visual anchor that will (hopefully) help her graduate to wanting to grab the crib and pull up. Both the yellow and white tape come from this set that I love.

So, sometimes I use the tape to highlight things that will help Rosalie work on all kinds of motor skills – but other times I highlight furniture for safety purposes.

I’m still figuring out what to do with the play room in our new house, but for now Rosalie’s visually defined play space includes a blacked out wall that runs into a dark shelving unit. I was concerned that the all-black corner would blend together and Rosalie might miss the hard side/corner of the shelves while crawling around – so I placed a strip of bright yellow duct tape, which seems to have done its job pretty well thus far!

Additionally, Rosalie’s increasing mobility allows her to now spend quality time exploring other parts of the house outside of her defined play spaces. If I’m cooking or cleaning anywhere near the kitchen, I often place her on the living room rug with some familiar toys and she happily entertains herself.

She regularly crawls to either the coffee table or a couch to pull herself into a kneeling position (and now fusses at me to come help her stand up all the way!), and she has almost bumped her head on the coffee table more than once. In order to hopefully prevent any hard bumps in the future, I added bright red tape to the corner she most commonly approaches.

Our living room has a lot of blue and some yellow, so I intentionally chose red to provide the most colorful contrast possible. This super bright red also comes from this pack of 6 colors.

And finally, because our little explorer is starting to venture out of the play room by herself and the stairs are a useful place to practice multiple physical therapy goals, I took her TVI’s suggestion to place some gym floor tape on the first two steps. 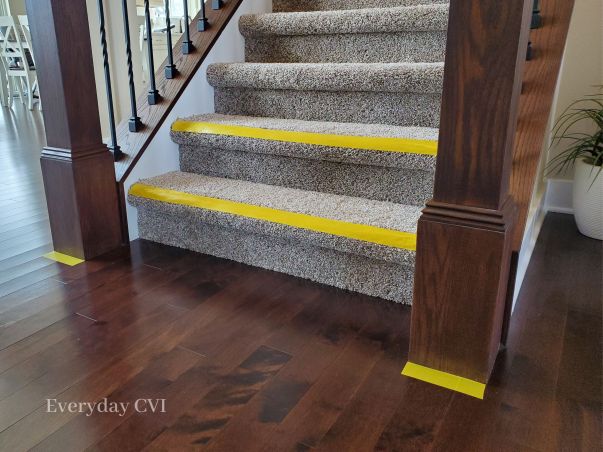 Previously, I had placed some white tape in front of the banisters where they meet the floor (to help Rosalie see them and stop/not bump into them). But when I added the yellow gym floor tape to the stairs, I switched it out and placed yellow everywhere. This utilized more of one, bright color in a concentrated area instead of multiple bright colors, which reduces a bit of complexity.

And in case you missed it on the Instagram page (@everyday.cvi), here is a glimpse at how I chose to highlight some light switches in our new house:

We tend to have a lot of blue decor and a plush Cookie Monster has been Rosalie’s number one comfort object for months, so I thought I’d go for blue and match our home a little more while keeping the switches flashy for our CVI warrior. 😉

My brain is already going into overdrive thinking about how/where we will someday use color to highlight more objects around our home as Rosalie grows (toilet and sink handles, dresser knobs, appliance buttons, the pull-out cabinet drawer that houses the kitchen trash can, etc. etc. etc.), so here is a friendly reminder to START BY HIGHLIGHTING ONE THING. Just one.

After all, it’s not about quantity, but the quality of the highlighting that matters most. What kinds of highlighting do you find functional within your home?

One thought on “Highlighting Objects Around the Home”