As my young child with Cortical Visual Impairment (CVI) has become progressively mobile, it has become increasingly important for me to think about what I can do to help her visually orient herself within our home.

You may recall that some months ago I began using washi tape (like this glittery set) to highlight some light switches with pops of sparkly color. This provided a fun visual and fine motor activity of turning light switches on and off while I necessarily carried my daughter, Rosalie, from room to room with me. So, it was only natural for me to start looking around at other things it would make sense to highlight as Rosalie began moving around the house more independently.

Where did I begin? For starters, I gathered my supplies: scissors and tape. Really, that’s all it took!

As you will see, I ended up using various kinds of tape on different surfaces – depending on the material, color, and what the purpose of the tape was. Pictured above is a shiny red tape, similar to this one found on Amazon.

END_OF_DOCUMENT_TOKEN_TO_BE_REPLACED

As my daughter with Cortical Visual Impairment (CVI) has progressed further into Phase II, I find myself constantly searching for new ways to integrate her vision with everyday functions. There are all kinds of ways to visually adapt Rosalie’s everyday “free play” time (creating defined spaces, providing toys and an environment that address the ten characteristics of CVI, etc.), but one tool I created specifically for this purpose is: a felt wall. 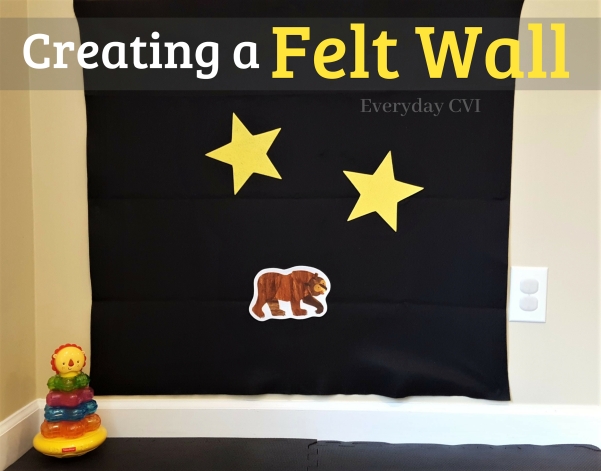 What is a “felt wall,” you ask? Well, it’s exactly what it sounds like. Instead of making a “felt board,” I selected part of a wall in our play room to cover with felt. This provides a sturdy back-drop on which I can display any number of felt pieces.

END_OF_DOCUMENT_TOKEN_TO_BE_REPLACED

Within days of receiving Rosalie’s CVI diagnosis I made a mental list of all the places she regularly spends time (the crib, high chair, car seat, bathtub, etc.) so I could think of how to make those spaces more visually accessible to her (which you can read more about here). We were very home-bound when she was little, due to many factors relating to medical complications combined with my sheer terror when I thought about the possibility of her (or her big brothers!) getting sick that fall/winter/spring. But, because Rosalie has two big brothers we necessarily spent a great deal of time engaged in free play throughout the house.

We clearly have two spaces in which the boys regularly play, depending on what time of day it is: the designated play room (located upstairs) and the living room (located downstairs near the kitchen). These were the two rooms in which I would spread out a big baby blanket and create a “play space” for Rosalie as she grew, so the obvious next step after learning about her CVI was to make both of those baby play spaces easier for her to see. I really don’t think I had even learned the visual term “defined spaces” yet, but it made perfect sense to minimize the complexity of these spots where I would regularly lay her down with some toys.

The living room was pretty easy, because I had already naturally carved out a little safe space for Rosalie where her brothers quickly learned to stop running, slow down, and be extra careful (we had made strict rules early on about not getting on her baby blanket without asking my husband or me). So, all I needed to do was trade out the blanket for one that is solid black (which I purchased on Amazon). Then, I placed a black tri-fold “science fair” board near the blanket so we could minimize complexity while she was side-lying or doing tummy time.

Since Rosalie was 7 months old when we received her CVI diagnosis she had long out-grown our “real” baby play mat that came with hanging toy attachments, but her CVI meant that she really needed to have things hanging above her that she could practice looking at. She was not yet mobile (she had started rolling to her sides and a little bit onto her stomach), so having things hanging above one space where she could not move from was an important way to integrate vision into her play time.