In honor of CVI Literacy Awareness Month, I’d like to share some of the strategies I’ve used to introduce my daughter with Cortical Visual Impairment to the book Brown Bear, Brown Bear, What Do You See? by Bill Martin, Jr.

When I added a felt wall to my daughter’s defined play space, my mom gifted me a set of pre-cut Brown Bear felt pieces. I had fun immediately introducing the matching felt pieces to the pages in the story, which provided a fun tactile (and visual, obviously) learning experience.

Pictured above are all of the animals from the book, but to address the CVI characteristic of “complexity” I present only one image on the felt wall at a time.

The ability to process 2D images typically emerges in Phase II CVI, but the images will mean nothing to a child if they do not have firsthand, 3D knowledge of what they are looking at. For this reason, I pair the pictures I show my daughter with 3D objects she can hold – and describe them using salient feature language (for concrete examples, check out the Salient Features Collaborative, which includes a sample dictionary). 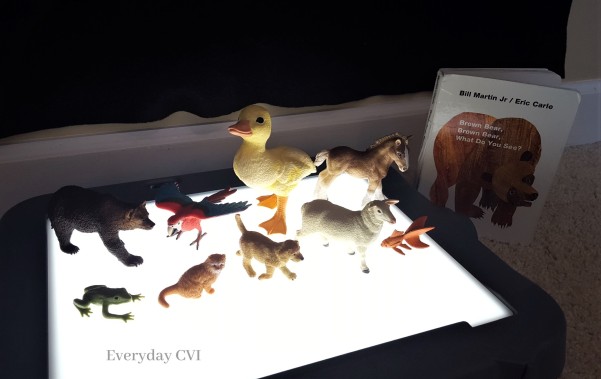 Pictured above is an assortment of animal figures, which I gathered to use when reading Brown Bear, Brown Bear, What Do You See? By the time my daughter was in Phase II CVI, she did not need light to focus on objects. However, due to the CVI characteristic of “light,” it can still be a helpful strategy to use light when introducing new and/or important objects (even in Phase III CVI!). So, often I would get out the light box while reading the book and place one animal on it at a time (novelty, complexity, light).

While reading, I would first read the words on a page, point out the picture and say what it is, then begin describing salient features of the animal and its color (because my daughter was still so young she didn’t even know – or couldn’t yet communicate that she knew – the names of colors). I might then point out the matching image on the felt wall or hand her the 3D animal, depending on what seemed to hold her attention better.

Sometimes she would be interested in the actual book or felt image, other times she might look, look away, and try to wiggle out of my lap (a clear sign she might be visually overwhelmed or fatigued), so I would quickly hand her the 3D object and focus less on the 2D images. I might switch tactics and, instead of focusing on salient features, simply tell her what sound the animal makes (because at such a young age, even teaching a color or just getting her to learn the name of an animal and mentally pair it with a sound is valuable – as is learning to improve functional vision!).

In this way, I could keep her engaged and get through more of the book than if I kept focusing on new images (novelty) and ignored her visual and/or physical fatigue (or general interest) cues. By respecting her physical capabilities and acknowledging when she needs a break (or will benefit from making it auditorily fun with animal sounds) I manage to avoid making her too frustrated – which in turn makes her more likely to want to read the book again later.

Because my daughter, Rosalie, is so young, there are many concepts and words she has not yet had the visual access to learn. This was clear using salient feature language to describe each animal, because I became highly aware of the fact that some of the salient features are “empty language” to her; it isn’t helpful if I say a bird has feathers if she doesn’t know what feathers are. This line of thinking prompted me to begin gathering additional materials to present alongside the 3D animals – such as the feathers pictured above. I found a small bag of assorted feathers for a few dollars at Michaels, but there are also plenty of options for less than $10 on Amazon. 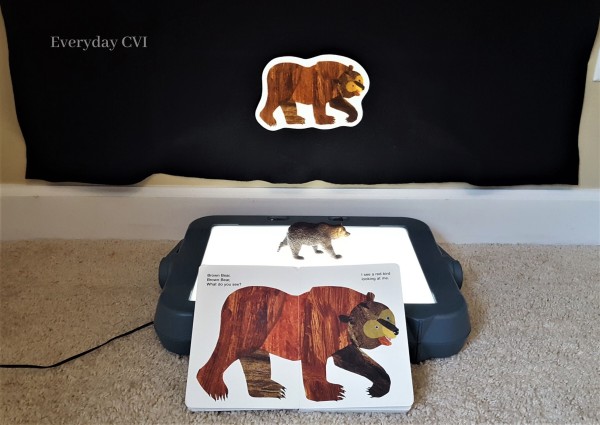 Pictured above is an example of one way I have presented the brown bear page and 3D figure to Rosalie. I would be sitting with her in my lap in front of the light box, holding the book in my hands. She could easily reach and touch the 3D bear and look at the felt bear on the wall.

Pictured below is another method of presenting the brown bear page.

Which is better? It depends entirely on the child, their interests, and how they function within the 10 characteristics of CVI. For example, what is their preferred visual field? How much complexity can they handle? Do they need light to help them focus longer? Answers to these questions help dictate whether it makes more sense to place the felt piece on the glowing light box right in front of them or on the wall in their line of sight when seated.

Also, I don’t necessarily recommend placing the actual book on the light box along with the felt piece and toy figure (as pictured above). I did this in the photo to give a size comparison, but in real life would be holding the book off to the side and reading while Rosalie looks at what’s in front of her. Much like this picture (below) of the felt piece and toy frog sitting on the light box.

In this example, the lights are dimmed which really draws the visual focus to the light box. I love how the toy frog almost looks like a silhouette, because one of the best ways I have heard “salient feature language” explained is to visualize something as a silhouette. Features that can be seen in a silhouette are the salient features! 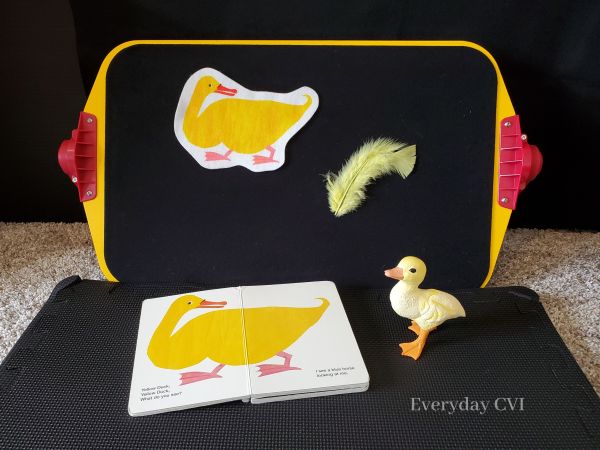 I snapped the light box photos last summer, but pictured above is a recent example of how I now present the book to Rosalie. She hasn’t needed light to focus on things for so long (and the book is no longer novel), that I don’t worry about using the light box for this activity anymore. Does Rosalie need to have everything blacked out to read this book? At this point, no – but that doesn’t mean that reducing background complexity isn’t helpful! This is a strategy that can always help a child with CVI maintain visual focus with any activity (in all 3 phases of CVI). 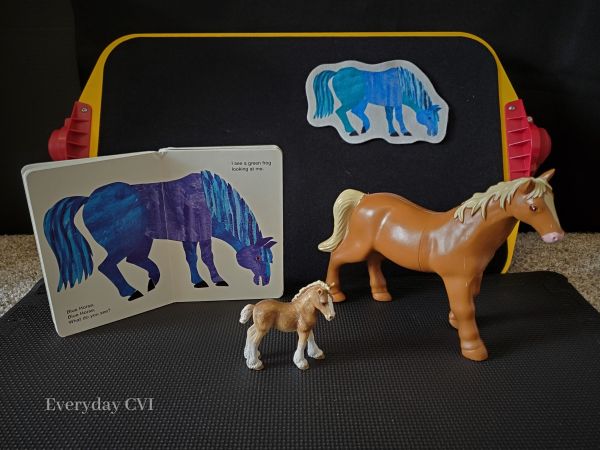 Over the months I’ve accumulated more toy animals that I can use with this book and I especially love our Learning Resources Jumbo Farm Animals! You can see that the horse (pictured above) is as tall as the board book, which translates to Rosalie being able look at (and better process) small salient features even better (i.e. the shape of an animal’s ear). Now I can also present the larger horse and smaller horse for comparison – so Rosalie can learn which features are salient to a horse and which can change (like color or the length of a mane). 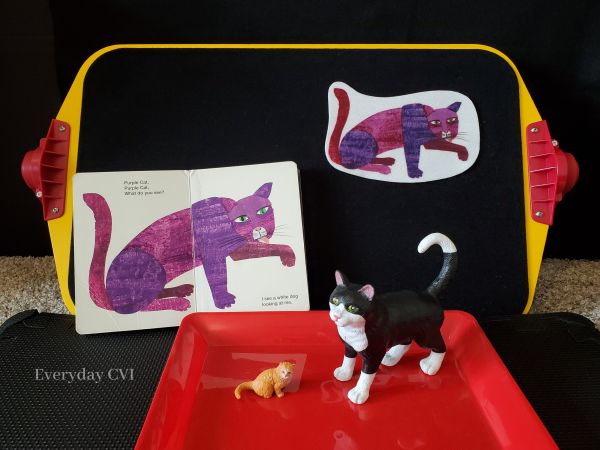 As you can see, I presented the cats (pictured above) on a red tray. This is because both the small cat and the large black one “disappear” visually on a black mat. The solid red tray provides striking contrast, making the animals easier to find visually (color, complexity). I love how these cats are sitting in different poses, which again provides more teaching (and comparison) opportunities for the salient features of “cats.”

If you like the black and white cat, it comes from this Learning Resources Jumbo Domestic Pets set. The collection also has a large dog and goldfish I now use to read Brown Bear, Brown Bear, What Do You See? The figures are not rock-hard like some plastic animals we have, which makes me feel more confident I can leave them around without my young child getting hurt (and the jumbo size means they aren’t choking hazards)!

There are many ways to introduce new books, toys, and everyday objects to a child with CVI. As long as the 10 characteristics of CVI and an individual’s CVI Range Score are taken into consideration when choosing strategies and adapting materials, there isn’t necessarily a “right” or “wrong” way to do it. The key is provide the child with visual access.

If you want more ideas specifically about literacy, I compiled a CVI Literacy Resource List that I shared in my previous post. And if you have additional ideas or resources, please leave it in the comments for other readers to discover. 🙂